A crucial policy initiative in 2021 was the preparation of a new EU strategic document, the Strategic Compass. Its aim is to enhance the EU‘s preparedness and enable it to respond more quickly and effectively to security threats. The Slovak Republic has been actively involved in discussions and will actively continue to be involved in the process of preparing the Strategic Compass, with the ambition of its adoption in March 2022. In May 2021, the EU approved a new financial instrument for the area of the Common Security and Defence Policy (CSDP) called the European Peace Facility and approved the first measures to strengthen the military and defence capabilities of our partners in Eastern Europe, the Western Balkans and Africa.  Slovakia was part of a coordinated EU approach and common line in a continued effort executed by the international community to achieve a comprehensive political settlement of the conflicts and civil wars in Syria, Yemen, Libya and the countries of West and East Africa.  The Slovak Republic continued its active participation in EU international crisis management. In 2021, it increased its presence in the EU operation in Bosnia and Herzegovina (EUFOR Althea) and also engaged in training missions in Africa through the EU mission in Mali (EUTM Mali) and the EU mission in the Central African Republic (EUTM CAR). Slovak experts continued to participate in CSDP civilian missions, the Advisory Mission in Ukraine (EUAM Ukraine), the Monitoring Mission in Georgia (EUMM Georgia), the Rule of Law Mission in Kosovo (EULEX Kosovo) and the Capacity Building Mission in Somalia (EUCAP Somalia).  The Slovak Republic implemented its commitments under the CSDP Civilian Compact and cooperated intensely with the European Centre of Excellence for Civilian Crisis Management in Berlin.  Slovakia and other partners from the European Union faced similar difficulties and problems in 2021. Everyone was looking for an answer to the question of how to deal with the difficult consequences of a pandemic on the economy of a country and society as a whole, while contributing to finding answers to the most fundamental challenges and dilemmas facing the European Union today. The EU‘s fundamental response is the recovery plan for Europe. Its successful implementation will depend on whether the Union will emerge from this difficult situation as a stronger and more respected actor capable of influencing what is happening on a global level.

Slovakia in the European Union

Slovakia has prepared its national recovery and resilience plan. It is intended to help with our postpandemic economic recovery in a way that will put green technologies, innovation and a more responsible approach to environmental protection at the forefront. In shaping a vision for vital areas of our life, the EU needs to listen to the voices of its citizens. Therefore, throughout the year, as part of the Conference on the Future of Europe and also in Slovakia, discussions by citizens and with citizens took place focusing on what form of Europe we actually want. In the EU, Slovakia has advocated strengthening the capabilities and capacities of the Union that will have positive impacts on the transatlantic partnership. It has consistently supported the EU‘s value-based Common Foreign and Security Policy and, in line with it, has also supported, in a number of cases, the use of EU restrictive measures to put pressure on regimes that suppress human rights. 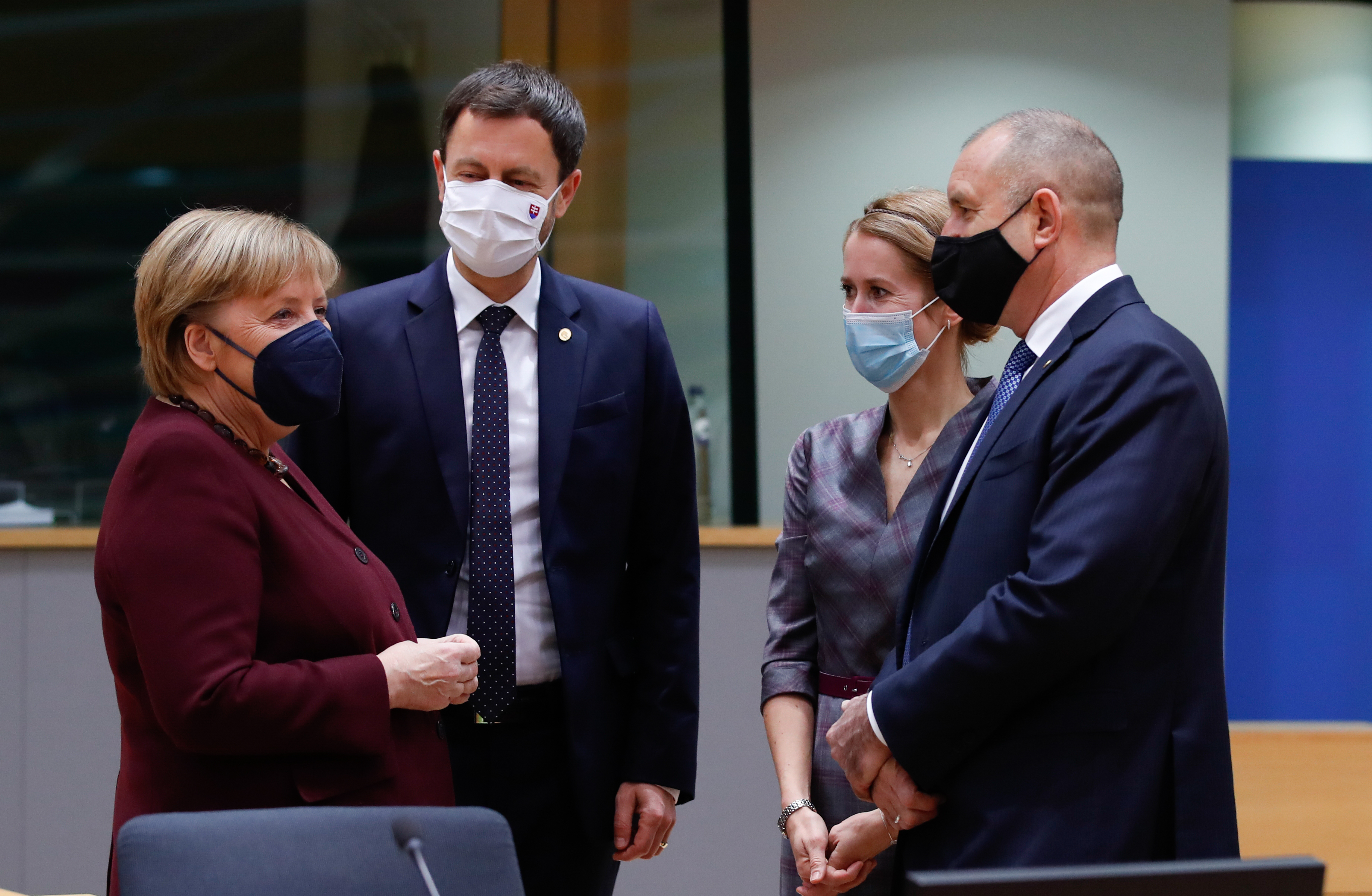 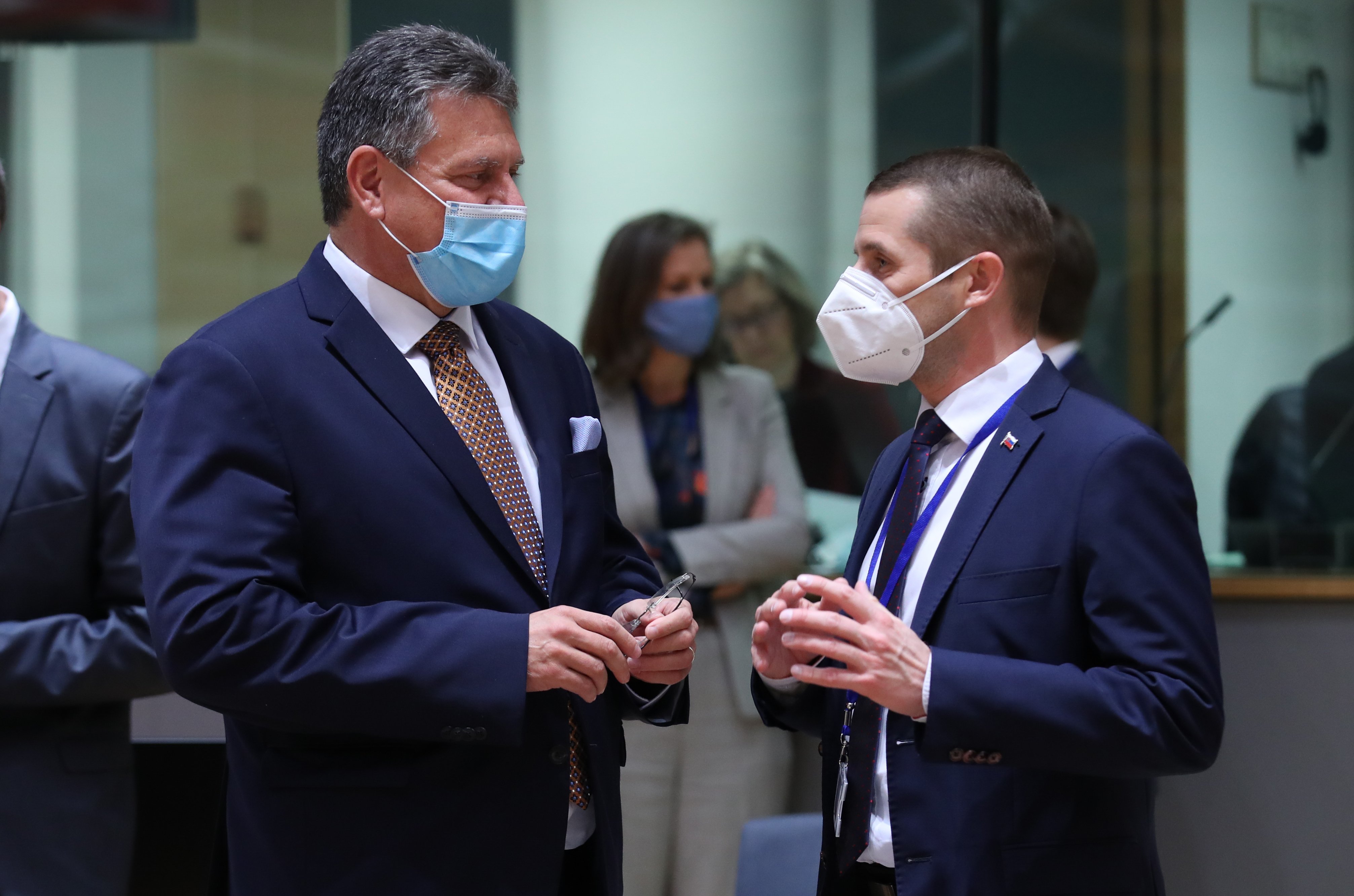 State Secretary Martin Klus at the General Affairs Council meeting in Brussels on 1 May 2021. A meeting of ministers and state secretaries for European affairs of EU Member States took place after more than six months of videoconferencing. The main topic was the preparation of the forthcoming extraordinary European Council meeting. (Photo: the European Union)

The European Union‘s agenda has been strongly marked by continued efforts to best manage the fight against the coronavirus. The activities of the Ministry of Foreign and European Affairs in this area were focused on cooperation in managing the situation with our neighbours and within the EU. The joint procurement of vaccines was a positive result of this effort. The mutual coordination helped to preserve the integrity of the EU Single Market and the rules on travel for third-country nationals to the Union. The adoption of the so-called digital COVID-19 passport can be considered a successful instrument, allowing citizens to travel substantially more freely and more safely across EU countries.

The European Union continued to recover from the economic crisis caused by the overall economic slowdown as a result of the consequences of the COVID-19 pandemic. The main prerequisite for the economic recovery of Europe was the implementation of the so-called EU Instrument for Future Generations, the core of which is the Recovery and Resilience Facility. It will provide EUR 672.5 billion in grants and loans to Member States to support key reforms and investments. EU Member States had to submit their national Recovery and Resilience Plans during the year. Their approval is a condition for drawing funds. The Slovak Recovery and Resilience Plan foresees the drawing of funds amounting to EUR 6.3 billion, of which up to 43% will be directed toward progressive climate measures. Bearing in mind the responsibility for environmental protection and the promotion of eco-advanced solutions, Slovakia will concentrate primarily on investments in renewable energy sources, and a cleaner and more functional public transport. It will also address long-term challenges in the areas of education, health and justice. The key challenge in the near future will be to deliver on concrete plans, which will be evaluated by monitoring the achievement of the milestones and targets. Their achievement is a condition for Slovakia to continue to use the allocated funds successfully.

Environmental protection is becoming one of the most important priorities on both a national and global level. The European Union has ambitions to become a model of responsible behaviour for other countries that will enable emerging generations to live in a greener, healthier and more pleasant environment. Under the socalled European Green Agreement, the European Climate Law was adopted under the Portuguese Presidency in the Council of the EU, which enshrined the achievement of climate neutrality by 2050. It also includes further actions by the European Council of December 2020, including a reduction target of 55% of net emissions for 2030. Slovakia has been actively involved in the work on a political agreement to increase the EU‘s climate ambitions. It was followed up by the “Fit for 55” legislative package presented by the European Commission in July 2021. With the support of Slovakia, the Union continued to update the rules aimed at creating a sustainable and functional energy sector. The accompanying elements of this process are the stimulation of necessary investments by both the private and public sectors, which should lead to a so-called “low-carbon society” and the use of clean energy. A significant step forward over the past year was also the agreement on the reform of the Common Agricultural Policy for 2023-2027, which aims to strengthen the modernisation and sustainability of the agricultural sector. 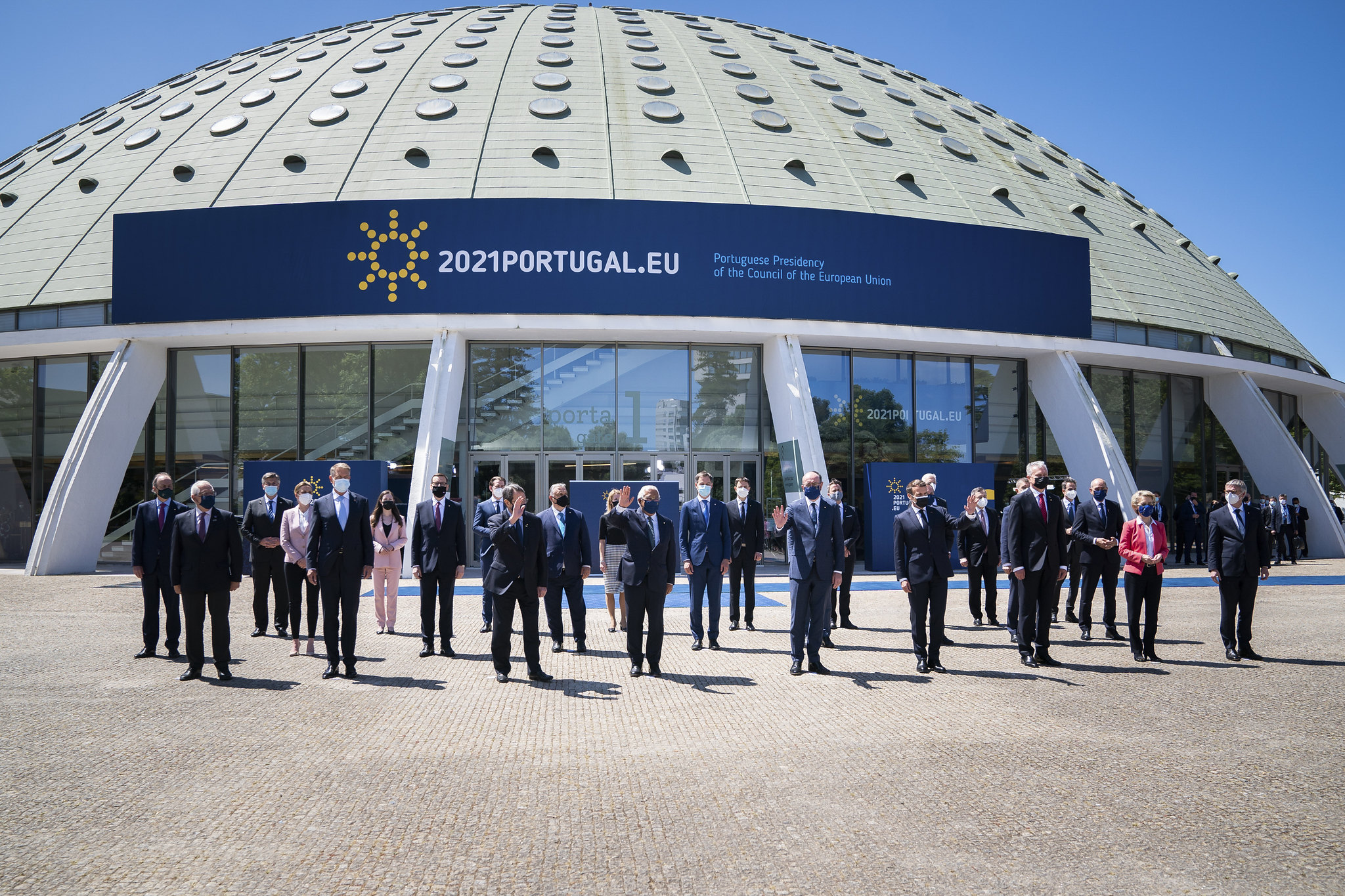 During his working visit to Portugal on 7 - 8 May 2021, Prime Minister Eduard Heger attended the EU Social Summit in Porto. (Photo: Government Office of the Slovak Republic)

The social dimension of European integration is an important part of the European project. The Portuguese Presidency in the Council of the EU succeeded in organising a social summit in Porto, which strengthened the implementation of the European Pillar of Social Rights. An important event for European social policy and for Slovakia’s deeper and more active integration into the agenda of European structures was the opening of the European Labour Authority (ELA) in Bratislava in November 2021. It was the first European decentralised institution to be based in Slovakia. The priority for ELA in 2021 was the implementation of the Action Plan to support seasonal workers, whose vulnerability was fully demonstrated during the pandemic.

Migration continued to be one of the most delicate areas of EU action. During the past year, discussions within the organisation focused on the continuation of negotiations on the so-called New Pact on Migration and Asylum, which was introduced by the European Commission in September 2020. However, despite efforts to make progress, the most politically sensitive issue of the fair sharing of responsibility and solidarity in managing migration flows to the European Union remains unresolved. There is general agreement on the need to support those Member States that are under the greatest pressure from migratory waves. However, differences remain as to the particular form of this solidarity. Slovak diplomacy is based on the long-standing opposition of the Slovak Republic towards the mandatory deployment of migrants to individual Member States. It continued to promote flexible solidarity-based solutions that will allow for the flexible identification of how to assist those Member States facing crisis situations. In terms of world developments, the events in Afghanistan and Belarus had a significantly destabilising effect on the migratory situation. Slovakia was extremely concerned about the abuse of the status of migrants by President Lukashenko‘s regime, which has triggered artificial pressure on the EU‘s external border and, in turn, a migration and humanitarian crisis. Slovakia contributed to a more effective protection of the EU‘s external borders and required consistent implementation of a systematic return policy and intensive EU cooperation with countries of origin and transit. The future of the Schengen area was also addressed. At the end of the year, the European Commission presented a proposal for a revision of the Schengen Borders Code. One of the objectives of this revision is to reflect the experience of the COVID-19 pandemic and to strengthen the coordination mechanisms between Member States so that the possible introduction of border controls at internal borders will always remain a last resort and a temporary solution.

Conference on the Future of Europe

The first activities of the Conference on the future of Europe (COFE) as a result of the pandemic started in May 2021. The primary objective of this project was to bring European institutions closer to the citizens of the Member States and, at the same time, to draw inspiration and incentives for the future functioning of the Union and the position of the Member States within it. It was exactly with this setting of priorities that Slovakia joined COFE and the Concept of the Conference on the Future of Europe was approved in the Slovak Republic in March 2021. Slovak activities took place on two main levels: 1) public debates on the EU with an emphasis on individual regions within the Slovak Republic and young people through the #MYSMEEU (WE ARE THE EU) project, and 2) expert analysis of priority sectoral areas for the EU through the National Convention on the EU. These activities of the Ministry of Foreign and European Affairs of the Slovak Republic were accompanied by strategic communication aimed at generating the widest possible involvement of citizens and political representatives, as well as the non-governmental sector or non-state actors in the activities of the conference. Slovakia was also an active part of the events of COFE on the European level. Citizens of the Slovak Republic also participated in the pan-European citizens’ debates and digital platform. 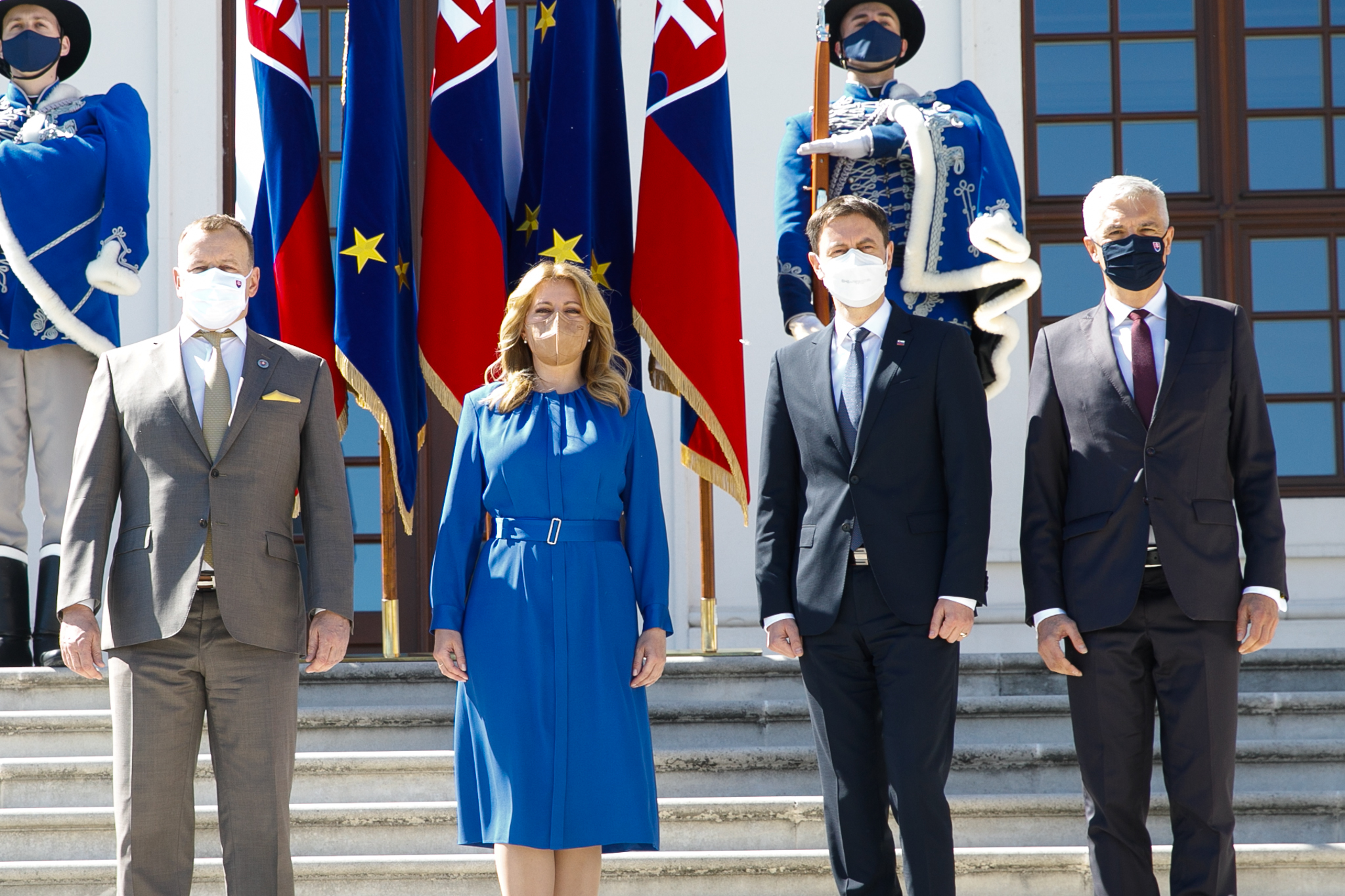 On 9 May 2021, the three highest constitutional officials - President Zuzana Čaputová, Speaker of the National Council of the Slovak Republic Boris Kollár and Prime Minister Eduard Heger - opened the Conference on the Future of Europe at Bratislava Castle together with Minister Ivan Korčok. This unique pan-European project, launched symbolically on Europe Day, is aimed at an open debate with the citizens of the European Union about its advantages, challenges and future orientations. (Photo: MFEA SR/Tomáš Bokor)