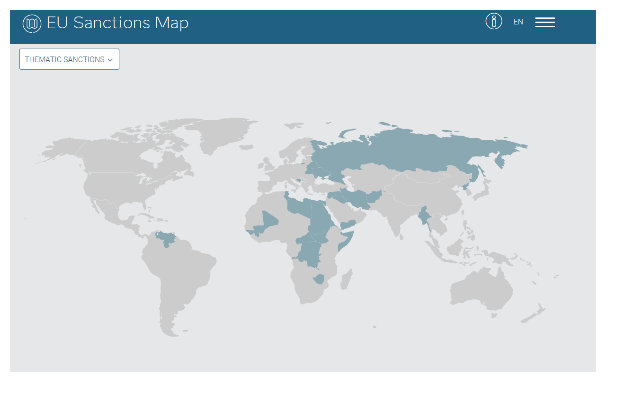 The purpose of international sanctions, also called restrictive measures, is to change the policy and activities of the State concerned, or natural or legal persons. The implementation of the sanction regime is based on the principles of international law, democracy and respect for human rights and fundamental freedoms, but not based on economic interests. International sanctions must be a proportionate measure aimed at actors responsible for a specific policy that is condemned by the international community.

Sanctions are also used to achieve regional stability and security, implement export control of strategic goods and fight against international terrorism. Control of the export of strategic goods shall also take into account the foreign policy and national security interests of the Slovak Republic in the framework of the EU's Common Foreign and Security Policy and the criteria laid down by EU Common Position 2008/944/CFSP, other international organizations, as well as the international regimes in the area of non-proliferation of weapons of mass destruction and other instruments for international export control.

International sanctions are introduced by directly applicable EU regulations and legal instruments of the Government of the Slovak Republic implementing other EU legislation as well as by UN Security Council resolutions and decisions of the Organization for Security and Cooperation in Europe (OSCE).

Arms embargoes: Arms embargoes can be applied to stop the supply of weapons and military equipment to conflict areas or to regimes likely to be used for internal repression or aggression against another country. In this respect, legal instruments imposing an arms embargo usually include: a ban on the sale, supply, transfer or export of arms and related materiel of all types, including weapons and ammunition, military vehicles and spare parts, a prohibition to finance and provide financial and technical assistance, intermediary services and other services related to military activities and the production, maintenance and use of weapons.

Typically, there are some limited exceptions to these prohibitions, in particular for equipment which can be used for:

Economic and financial sanctions: They consist of export and import prohibitions (trade sanctions that may apply to specific products such as technological equipment, oil, diamonds), bans on the provision of specific services (intermediary services, financial services, technical assistance), flight bans, investment bans, payments and capital movements or the abolition of customs preferences. Restrictive economic and financial measures, including targeted financial sanctions, must be applied by all persons and entities conducting business in the EU, including non-EU nationals.

Targeted financial sanctions: The EU often imposes targeted financial sanctions that can be directed to specific persons, groups or entities in charge of policies or actions against which there are reservations. Such sanctions consist of the obligation to freeze all funds and economic resources of target persons and entities and of prohibiting the creation of funds or economic resources directly or indirectly available or otherwise beneficial to those persons and entities. Exceptions are possible under special conditions and in special procedures (e.g. funds needed for basic expenses including payments for food, rent or mortgage, medicines and medical treatment).

Entry restrictions (visa or travel ban): Third country nationals may be subject to an EU entry ban. Member States are invited to take all necessary measures to prevent persons on the list from entering or crossing their territories. There are exceptions to the visa ban or travel ban when it comes to humanitarian or other reasons, or so that Member States' obligations under international law are respected.

On 1 February 2018, the National Council of the Slovak Republic approved a government bill amending Act No. 297/2008 Coll. on Protection against the Legalization of Criminal Proceeds and on Protection against Financing of Terrorism and on amendments and supplements to certain Acts, as amended, and amending and supplementing certain acts. This Act also amends Act No. 289/2016 Coll. on the Implementation of International Sanctions and on the amendment to Act No. 566/2001 Coll. on Securities and Investment Services and on amendments and supplements to certain acts (the Securities Act), as amended.

Ministry of Economy of the Slovak Republic

Ministry of Transport, Construction and Regional Development of the Slovak Republic

Ministry of Culture of the SR

Ministry of Education, Science, Research and Sport of the Slovak Republic

Ministry of Interior of the Slovak Republic

Ministry of Labor, Social Affairs and Family of the Slovak Republic

Ministry of Justice of the Slovak Republic

Ministry of Finance of the Slovak Republic

Sanctions are imposed by the United Nations Security Council (UNSC) in accordance with Chapter VII of the UN Charter: Actions in case of threat to peace, violation of peace and acts of aggression. The UN Charter grants the UNSC powers to decide in a manner binding on all UN members about the restrictive measures needed to preserve or restore international peace and security in case of a threat to peace, disruption or attack.

UN sanctions are a formal expression of the opinion or will of the UN bodies. They generally consist of two clearly defined parts: the preamble and the operative part. The preamble generally sets out the considerations on the basis of which steps have been taken, expressed in the opinion or in the Directive. The operative part discusses the position or measures to be taken by the competent authority.

Subsequently, the EU applies UNSC resolutions, adheres to the conditions of these resolutions, but may also decide to apply other restrictive measures without undue delay.

The list includes all persons and entities subject to sanctions imposed by the UNSC. The inclusion of all names in a single list of consolidated sanctions is intended to facilitate the implementation of measures and does not mean that all names are in one mode, nor are the criteria for appointing specific names the same. For each case in which the UNSC has decided to impose sanctions in response to a threat, it operates under the sanction’s mode of the relevant UNSC committee. Therefore, each sanctions committee set up by the UNSC publishes the names of the persons and entities listed in relation to this committee, as well as information regarding specific measures applicable to that name (https://www.un.org/sc/suborg/en/sanctions/information - after clicking on the SANCTIONS section on the top left side).

The current version of the consolidated sanction list is in .xml, .html, and .pdf formats. Member States are required to introduce measures specific to each name as indicated on the relevant Sanctions Committee website – subsidiary UNSC bodies. Comments and questions regarding all sanctions lists, including the UN sanctions list, can be applied through the e-mail address of the secretariat: sc-sanctionslists@un.org.

References to selected resolutions published under Act No. 289/2016 Coll. (in English):

Note: Under UNSC Resolution 1373 (2001), no sanctions are adopted at the UN level; its aim is to create a framework within which individual Member States take sanction measures against specific individuals and entities (e.g. autonomous EU sanctions which also apply in Slovakia).

Follow-up resolutions listed chronologically, including a description of the most essential measures required of all Member States

Note: The application of sanctions under this resolution has been suspended by the adoption of UNSC Resolution 2231 (2015) of 20 July 2015.

In case of an interest you can subscribe to the following link: https://www.un.org/securitycouncil/content/un-sc-consolidated-list#Mailinglist  in order to receive regularly subsequent resolutions by e-mail.

Under the Common Foreign and Security Policy (CFSP), the EU applies sanctions to achieve specific CFSP objectives. EU sanction (or restrictive measure) refers to a set of enforcement measures – restrictions, orders or prohibitions – introduced to maintain or restore international peace and security, resulting from 1) UN Security Council binding decisions adopted under Chapter VII of the UN Charter or 2) a separate (autonomous) EU decision. EU sanctions can be applied against third countries, non-state actors as well as individuals (such as terrorist groups and terrorists). The role of sanctions is to achieve a change in the activity or policy of the relevant actors, which constitute a fundamental violation of international law or human rights, or non-respect of the rule of law and democratic principles.

The objectives of sanctions

The European Union applies sanctions to achieve the specific objectives of the CFSP, which include:

The adoption of sanctions is decided by the EU Council, which unanimously adopts the relevant decision, based on Art. 29 of the EU Treaty, expressing that intention. The decision-making process is preceded by the work of the working groups, namely the group responsible for relations with the third country concerned (Regional Working Group), Working party of Foreign Relations Counsellors, (RELEX) and the Committee of Permanent Representatives (COREPER II). In the event that sanctions within the meaning of the Council Decision also relate to areas within the competence of the European Commission, it shall subsequently draft, on the basis of Art. 215 of the Treaty on the Functioning of the EU, a proposal for a regulation which the Council adopts by a qualified majority. EU Council decisions and regulations imposing sanctions or restrictive measures are published in the Official Journal of the EU (thus taking effect).

EU regulations imposing sanctions have a direct effect in EU Member States and Member States themselves are responsible for their application. Anyone in the territory of a Member State, including persons with diplomatic immunity and other diplomatic privileges, as well as foreign business entities that are registered in the Commercial Register or any other equivalent register in the Member State, must comply with the sanctions.